What a weird year it’s been. Who would ever thought just 10 months ago that we’d be doing so much indoor training – and even indoor racing – in 2020. Apps such as Zwift, Trainer Road, Sufferfest, Road Grand Tours, Rouvy, BKool, Fulgaz, and others have changed the way we think about riding indoors. And the changes have been rather dramatic.

How did indoor cycling get to this point? Here’s how I remember it.

In the 1970s if the weather was really bad you just didn’t ride, or you went to a gym and rode one of those big, ugly, and uncomfortable indoor cycling machines. They were awful. So most cyclists usually didn’t ride on such bad-weather days. In the early ‘80s I started using a “turbo trainer” when the weather kept me off the road. I vividly recall getting my first CompuTrainer in the late ‘80s and being amazed at all it could do compared with my former options. It was a game changer. But still on snowy days in Colorado’s winter I spent hours at a time on my bike in the living room turning the cranks as I watched old DVR recordings of the Tour de France and Ironman (Tour programming was typically one-hour recaps of what happened that week with somewhat longer coverage on the weekends). Watching such vids was the only way to break the monotony (other than, of course, listening to disco). It never crossed my mind then that indoor training could possibly be fun. It took tremendous motivation to get through a three-hour, sweat-soaked ride with a snowstorm raging outside my window. Bad weather was the only reason to ride inside then. And it had to get pretty bad before I’d set up a trainer. It was more like punishment than training.

All of this didn’t change much until the early 2010s when much improved indoor equipment – “smart” trainers – and online apps started appearing. It still took quite a while – and lots of bad weather – for them to slowly catch on, even though such equipment and apps were much more entertaining than watching old race videos on a “dumb” trainer. Poor weather was still the main reason most cyclists would ride inside. Things began to change over the next few years as indoor riding became increasingly popular. And it eventually dawned on me in late 2017 that there really wasn’t much available on how to get started with indoor training using all of the latest technology. Perhaps I should write a book about this, I thought. In late 2018 I finally committed to the project.

Then the Coronavirus pandemic hit us hard and things began to change dramatically.

As with most books I’ve written it took me a lot of self-talk to finally become convinced to start down that path again. It’s always a long, tedious haul going from concept to finished product. Along the way I was fortunate to bring author and former elite-cyclist, Jim Rutberg, onboard to be my co-author. He was a tremendous help. Jim is much more of an authority than me on the many complexities of indoor equipment, apps, e-training, and e-racing. Together we decided to take on the project. It took a lot of idea-sharing, research, and well over a year of writing, but we now have Ride Inside on the bookshelves as of a couple of days ago, both in paperback and as an e-book. It can be purchased here (note the 20% discount through October 15).

Even if you aren’t interested in e-group rides or e-racing, riding inside with the latest technology has some definite advantages (alongside some seeming disadvantages, as discussed in the book) that could improve your training over the course of the coming winter. And it’s a lot more fun than turning the cranks on a turbo trainer as you stare at a basement wall for what seems like an eternity.

To help you get started on riding inside using the newest equipment and apps, Jim and I are offering a “Ride Inside” webinar on November 7. You can find all of the details and the registration page here. For about 90 minutes Jim and I will dig into the most important topics in our book before focusing the Zoom-cast on your questions. If either of us can answer questions now about what to expect feel free to contact us via my website. We look forward to talking with you. 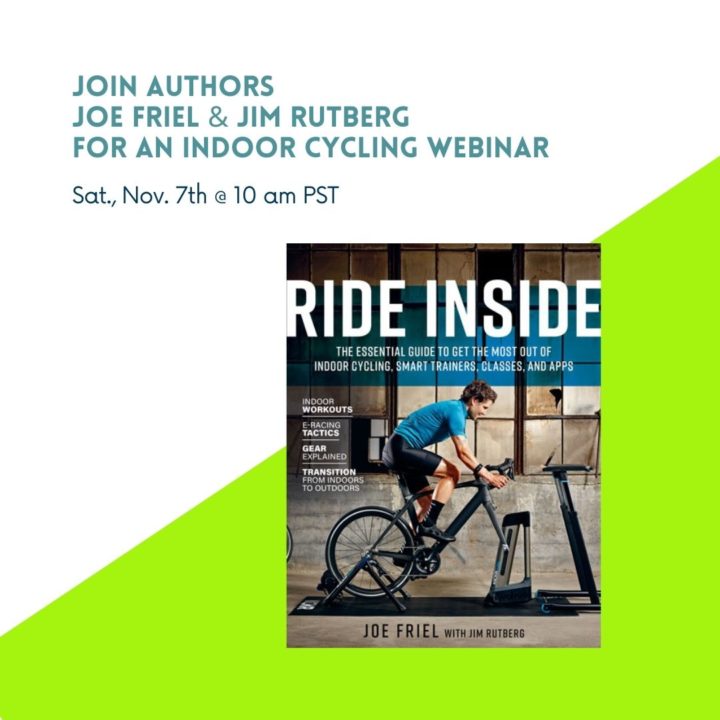