I'm taking a brief break from brittle bones to write about other topics. My next posts on bone health will have to do with what the reserahc suggests is effective. Turnsa out that there is a lot of research to read on this topic. In the mean time, the Paris-Nice stage race is being contested in France and Versus television is covering it here in the States.

Last night I watched the March 11 Paris-Nice Time Trial which Tony Martin (HTC-Highroad) won taking the yellow leader’s jersey from Andreas Kloden (Radioshack). I have no way of knowing for sure, but I suspect the difference (46 seconds) between the two finishing times was more a result of aerodynamics than power.

It’s obvious that Martin has devoted a good deal of time to getting his position dialed in. Even though Kloden’s back is much flatter, Martin’s rounded back is not a problem. The wind will be escorted over it and off the trailing edge rather smoothly. The thing that Martin does best, however, is keeping his head out of the wind. This isn’t easy to do but the pay off is significant. I’ve written about this before (Feb 2007, Feb 2010, December 2010). 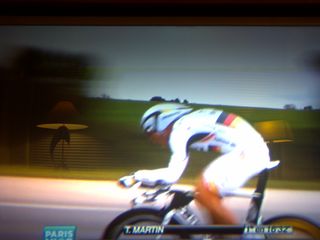 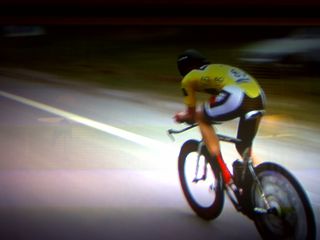 The accompanying pictures were taken from the television and so are a bit blurry (click to enlarge). The first is a sideview of Martin showing his rounded back. The second is of Kloden. Kloden’s much flatter back is evident. But in these two pictures notice how much lower Martin’s head is. A high head position could slow a rider by more than 1%. The difference of 46 seconds amounts to 2.24% of Kloden’s time.

To get your head into the position Martin has his in in the above picture requires pointing your nose almost straight down and then rolling the eyes up as if looking over your sunglasses. This takes some getting used to. Both your neck and your eyeballs will fatigue unless you do it frequently. They can be trained just as your legs are. 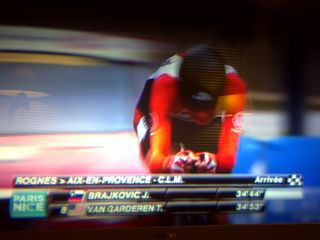 Here in the third picture you can see a picture of Jani Brajkovic (Radioshack), another excellent time trialist, in a head-on shot. Notice that his chin is below his chest and that the top of his helmet is about even with the top of his back. He’s looking “over the top of his sunglasses.”

But Martin did something else, mostly early in the race, that I believe reduces drag even more. He further lowered his head and looked straight down at the ground briefly 10 or more times a minute. This further reduces the drag created by the head as it is then completely below the back. The small helmet tail sticking up creates insignificant drag compared with the much larger head in the lowered position reducing drag significantly. 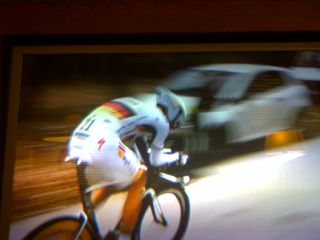 You can see a picture of it here. My December visit to the Fort Collins, Colorado wind tunnel, along with the guys from PowerTri, suggested that this head-lowered position saves another 1% or more. I never saw Kloden look down once. He kept his head in what is considered to be the traditional time trial position as best he could as shown in the last picture. 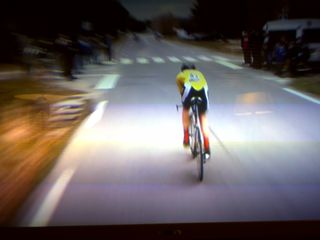 Be aware that looking down is dangerous. A friend of mine has been in a wheelchair since 1987 because he was riding in this position and ran into a vehicle. The way Martin did it was perfect. He looked down for just a second or two at a time but did it repeatedly. The best times to do this are when you are going downhill or into a strong head wind.

Also, getting your head into the below-the-back aero position (not even the more aggressive head-down-helmet-tail-up position) is not going to work for everyone. The longer your time trial the more challenging this becomes. For example, in a half or full Ironman-distance race the very aggressive position used by any of these three riders is probably not going to work. Neck, back and eyeball fatigue will be too great causing you to come out of the aero position repeatedly, especially later in the race. That will “cost” you more time overall than simply having a more comfortable position. It may even be overly challenging for races lasting an hour or so. But if you’re time trialing for less than an hour and you need to shave a few more seconds off of your time to be competitive then you might give it a try. That requires training on your TT/tri bike frequently working on position.

The starting place for this is a bike fit by a professional fitter. Making changes to your position to become more aero without taking into consideration how those changes affect the other aspects of your pedaling technique and position is as likely to slow you down as to speed you up.