In my last post on aging I
pointed out that the rate of decline in endurance performance appears to
accelerate after age 60. What is the cause of this decline and how can you
train to moderate it?

Before getting into all of this
let’s review the basics of training for endurance sport because when it comes
to modifying how you train in order to reduce the negative effects of aging on
performance you to need to first know what your options are.

You may recall from earlier
posts here that there are only three elements of fitness you can manipulate in
training for your sport to improve performance – aerobic capacity (VO2 max),
lactate threshold and economy. I’m not going to discuss these here as you can
read about them in the links provided. If you’re not quite sure what these are
I’d strongly recommend that you reread the posts as they are the focus of the
research on aging and performance.

Actually, there isn’t a
whole lot of research on aging related to athletic performance. The few studies
and literature reviews I’ve come across that seek a cause for the declines in
competitive endurance performance with advancing age point the finger of blame
at aerobic capacity as the most likely reason (3,4). One implicated lactate
threshold as a primary cause (1) while others found this to be of secondary
importance (3,4). None suggest that economy is not an issue  .

The best studies for topics
such as aging are longitudinal as opposed to cross-sectional. The latter
research looks at a large group of people of various ages at a given point in
time. Such research assumes that a 60-year-old athlete studied today would have
performed 20 years ago the same as a 40-year-old athlete also studied today. On
the other hand, a longitudinal study follows a group of subjects over several
years to see what changes occur. These are the most revealing but for obvious
reasons are rare.

One such longitudinal study
out of the University of Zurich measured the change in VO2 max over a 15-year
period in a group of 27 elite endurance runners (2). They were first tested in
1973 with a follow up in 1988. In the follow-up the athletes would have been in
their late 30s to early 40s, so hardly what you might call “old.” Over the
years, however, they had changed their exercise routines. Nine of them had
become fitness joggers. Their rate of decline in VO2 max was 16% per decade.
That’s a lot of change. Sedentary folks’ loss of aerobic capacity is generally
thought to be around 10% per decade. Some research suggests that athletes who
cut way back or stop training altogether tend to lose VO2 max as they age at a
faster rate than their sedentary peers (3). This is probably due to the
athletes’ higher starting point when the cut back began.

In the Zurich study the five
most active who were still training and racing at a high level maintained or
even increased their aerobic capacities. Remarkable! The 13 athletes in the
middle group who trained but were less concerned with performance showed a rate
of decline of 7% per decade. The changes were found to be mostly the result of
changes in training mileage (fewer miles), average running pace (slower), and
body composition (as body fat increases VO2 max is likely to decrease).

Another such longitudinal
study comes from the human performance lab of acclaimed exercise physiologist
David Costill, PhD, at Ball State University in Indiana (I started my grad work
there in 1971). Talk about longitudinal! This study followed a group of 53
elite, male runners over 22 years (5). They were first tested in the late 1960s
and early 1970s. All experienced a loss of VO2 max. The accompanying chart
(click to enlarge) illustrates how great the changes were. Notice that those
who kept on racing had the lowest rate of decline on average, but somewhat more
than the Zurich study’s racers. The training mileage was higher for those who
continued racing, their average pace was greater and they gained less weight
than the athletes who ran only for fitness. (Side note: It’s reported that Dr.
Costill, a collegiate swimmer in his youth, actually improved his swim times by
his 50s 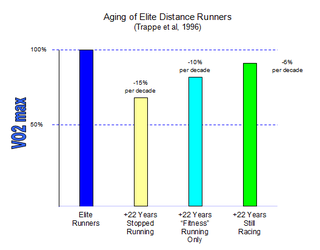 In summary, it appears that
aerobic capacity (VO2 max) and lactate threshold are the most likely culprits
when it comes to slowing down as we get older. And there is considerable
evidence that VO2 max does indeed decline. However, researchers appear to be
less interested in studying lactate threshold. So where does this leave you
when it comes to your long-term training? In part 3 of this series I’ll get
into what I think is the best way to maintain performance with advancing age.

But first I’m off to Bangkok
for a few days to speak at a seminar. I’ll come back older (and perhaps wiser)
with answers to this question. I hope.