What we thought we knew about “normal” aging isn’t really normal for humans
at all. Master and senior athletes provide proof of that every time there’s a
race. Many older athletes continue to perform better than most young athletes. They
can do it because they have the right genes and they continue to push both
their physical and mental limits. They’re unwilling to accept a number as a
reason that they can’t do it. While aging does inevitably take a toll on
performance, it’s small compared with the loss of functional performance that
“normal,” inactive people experience due to disuse. Most people “rust out”
rather than “wear out.”

Strenuous exercise is a key to not only the quality of life, but also to
its quantity – how long we live. This is difficult for science to “prove” as
university ethics committees charged with approving study protocols aren’t too
big on manipulating human subjects’ lifestyles to see who lives longer. That
leaves us with animal studies on the affects of exercise on health and
longevity.

One such aging and exercise study using mice was done at McMaster
University in Hamilton, Ontario, Canada and reported in the Proceedings of the National Academy of
Sciences in 2011 (Safdar). Mice that were bred to age rapidly were divided
into two groups. One group was sedentary. The other group ran on treadmills
three times per week for 45 minutes each time at a brisk pace – the equivalent
of a 50- to 55-minute 10km run for humans. By 8 months, which is roughly age 60
for humans, the sedentary mice were frail, grey and dying. In the picture you
see two of the subject mice. On the left is an exerciser. A sedentary mouse, of
the same age (30 months) is on the right. There’s an obvious difference in
their physiological ages. 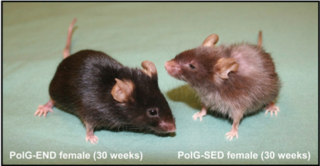 All of the sedentary mice were dead by 12 months of age. But by that age
the exercisers were still young looking and behaving – and none had died. It’s
much the same for humans, I suspect. Exercise regularly and strenuously and
you’ve greatly extended both the quantity and quality of your life.

Exercise is perhaps the most powerful medicine there is when it comes to
health and longevity. Your chronic diet ranks right up there, also. I’ll get to
that in another post.

I suspect you already know this. If you’ve been an athlete for several
years it’s undoubtedly obvious that your age-mates look older than you. By the
time you are in your 70s you will be much more active than your “normal”
friends. Your quality of life will be much better. And chances are you will
live longer.

But, of course, most of us old geezers don’t train and eschew the
shuffleboard lifestyle simply to live longer. That would be nice, however. We mainly
do it to enjoy the challenge of athletic accomplishment with like-minded
athletes. I’ve never met a serious athlete who spoke only of exercising to live a long time and wasn’t interested in improving
his or her athletic performance, regardless of age.

Living a long time is a welcome side affect, but let's get back to athletic performance.

The point I’ve been making in the past few posts is that the decline of
performance with age has been shown to result from a decrease in aerobic
capacity (VO2max) in most experienced,
aging athletes – not to decreases in lactate threshold or economy, the other
two primary factors in endurance performance. There could be lots of reasons
for this decline. The reason that is the most commonly reported in the
scientific literature is a reduction in both high-intensity training and
training volume that is common as we get older (Foster, Hawkins, Tanaka, Trappe,
Wiswell, Young). And, as I discussed here, the more powerful
influencer of aerobic capacity is the intensity at which we train. But there is
a lot of physiological stuff that may have to do with the reduction in how much
oxygen we can process while exercising.

The decline in aerobic capacity may also result, in part, from a loss of
muscle mass. This too is often related to the decline in high-intensity
training, but apparently has an aging-related component even among serious
senior athletes (Faulkner). In the normal (meaning “sedentary”) population,
muscle area decreases up to about 40% from age 20 to 80 (Doherty, Lepers). The
decline is considerably smaller – and sometimes even non-existent – in senior athletes as I explained here.

Increasing the intensity of training places greater stress on the
primary working muscles for your sport and encourages muscle development. This
is because exercise, especially highly intense exercise, is anabolic (builds muscle
and other tissues) as the body responds by increasing its production of
hormones such as testosterone, estrogen, growth hormone and insulin-like growth
factor (Cadore, Kraemer, Stokes). Hormone release occurs
primarily during sleep which is why it’s so important to snooze a lot when
training hard.

Another way to accomplish gains in muscle mass is through resistance
training (Arazi, Lemmer, Melov, Porter) – “lifting weights.” Regardless of age,
strength training, especially with heavy loads, has been shown to slow the loss
of muscle fibers, which is common with advancing age, while maintaining muscle
fiber size (Aagard). Lifting heavy weight loads has also been shown to benefit
endurance performance (Ronnestad), but is somewhat more controversial. If true,
this may be due to type 1 muscles (slow twitch, endurance muscles) being able
to manage a greater load during endurance exercise thus delaying the use of type
2 muscles (fast twitch) during exercise (Ronnestad).

Then there’s the matter of bone density as we get older. Lifting heavy
weights can play an important role here, too. Running is an excellent way to
maintain bone health due to the increased load placed on the legs, hip and
spine. But it does nothing for the arms. Cycling and swimming are less
effective when it comes to maintaining bone density as load bearing is quite
low (Gomez-Bruton). Strength training, however, has been
shown to maintain or even increase bone density, an area of concern for both
men and women, with aging (Marques, Yarasheski).

Much the same as with sport-specific, high-intensity training, lifting
heavy loads in the weight room can be risky for the senior athlete who has not
been doing so regularly for some time. The key here, just as with getting
started with interval training, is to begin conservatively, meaning light loads
with few reps and sets, and progress to greater loads and volume slowly allowing the body time to adapt. A single,
overly enthusiastic mistake made in the weight room could jeopardize a season
and even your athletic career. Be cautious when just starting out, especially
when doing whole-body lifts such as squats and dead lifts.

For the serious senior athlete who is focused on high-performance
racing, periodization of strength training must be considered. In regards to
this, the best time for serious weight lifting is in the Prep and early Base
periods of the season. Heavy and frequent lifting just prior to and during the
race season (Build, Peak and Race periods) will be counterproductive for performance. That’s the time for
strength and muscle maintenance. Again, this is all explained in my Training
Bible books.

For my next post in this looong
series on aging I’ll get into how to avoid the common pitfalls of
high-intensity training – both sport-specific and for weight lifting.