I’ve got training logs that go back to the 1970s when I
first started recording my workouts. My heart rate data started in 1983, power in
1995. I had intended to go back and review all of that before sitting down to
write this. But last weekend we flew to Lucca, Italy, where I am now. Preparing
to leave is always a hassle. But being gone from my office for two months meant
getting a lot done before the trip. I never got around to checking my training
records, so much of what follows is based on memory. And it seems the older I
get, the better I used to be.

Things appear to be changing this year. I’m not sure if it’s
my age that’s behind it, just an aberration, or the inevitable circumstances of
a busy life in 2013 with lots of travel. Of course, it could be some
combination of all of these – and more. Regardless, it’s disturbing and has me
wondering.

By “changing” I mean I’ve become less powerful. And it seems
like it happened all of a sudden. In March I tested my Functional Threshold
Power (FTP) and it was right where it has been for the last six springs when I first
started testing this marker of performance. This was done in Scottsdale, Ariz.
where I spend my winters. My summers are in Boulder. My power is always
considerably lower in the latter due to the altitude. And sure enough, my FTP
was where it always is in the first few weeks after arriving at 5500 feet –
down about 8% from Scottsdale where I live at around 1800 feet.

Usually, around a month into my adaptation to the higher
altitude about half of the lost watts come back. By the end of the summer when
I’m ready to head south to Scottsdale, my FTP in Boulder is about
what it was at the lower altitude in March. Then when I get back to the
lower altitude I see my peak FTP for the season.

But not this year. Things were different. My FTP in Boulder
never rose. It stayed at the -8% decrement all summer. And when I got back to
Scottsdale, it didn’t come up – at all. To add to the concerns, my sprint power
is the lowest it’s been since I started testing it. Could these changes be the
first signs of age catching up with me?

For many years my FTP and sprint have been about the same
with only seasonal or environmental (altitude in Boulder, summer heat in
Scottsdale) shifts. My power for specific types of workouts, especially
intervals and tempo rides (here’s the questionable memory part), has changed
very little since 1995. As a 50-something rider I was slightly above average
at, for example, time trials and climbing back then. Fifteen years later I’m a
much better-than-average senior rider for TTs and hills. I don’t think I improved;
my age peers just slowed down more. But now I may be catching up with them, it
seems.

Of course, we are all going to have reduced athletic performance in
endurance sports as we age. It’s inevitable. But we really don’t expect to see it happen – ever. And when it does, as I seem to be experiencing this
year, it’s a bit frightening.

How much of a change should we expect? And when?

There was a great study that came out of Boise State
University in 2009 – “Masters Athletes: An Analysis of Running, Swimming and
Cycling Performance by Age and Gender” (Ransdell). The problem with most
studies on athletes and aging is that they look at broad cross sections of various
age categories by gender. That means they are comparing a wide range of
abilities – front to back of pack – with motivation having a lot to do with
performance. Some people simply aren’t motivated to train. And as the number of
participants in endurance sports increases, the percentage of those who could
not care less about performance and are only doing it for social reasons is
likely to increase. That waters down the data so that we really don’t know what
the true impact of age on performance is likely to be.

The authors of the Ransdell study examined only current US
and World record holders by age groups in three sports – swimming, running, and
cycling. That means we are now able to better understand what happens when
motivation to train and compete is taken out of the equation leaving only age
and gender as the modifiers of performance.

The following three charts are based on data from this
study. While the scientists looked at several event distances within each
sport, I’ve selected out only the longest and most common, long-endurance
distances – 1500m swim, marathon, and 40k time trial. On the left side of each
chart (the X axis) are the times of the records and across the bottom (Y axis)
are the age groups. The charts aren’t terribly precise but give us a good look
at trends. 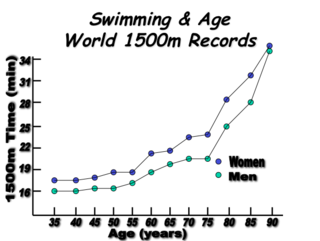 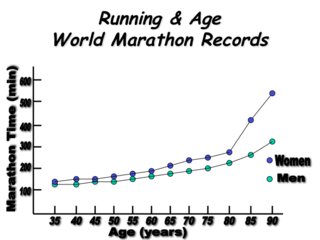 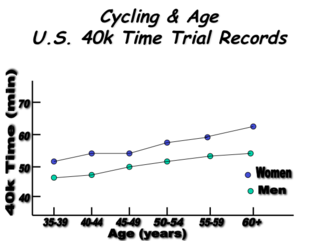 Note from these charts that in the age groups from 50-59 there is a
slight decrease in performance with it being greatest in swimming (the times get slower as indicated by rising
lines). Women’s performances tend to decline even faster than the men’s,
especially in running. Swimming shows the least gender-related decline.

These findings are roughly in agreement with other papers
that also studied elite age-group athletes. For example, Wright and Perricelli
looked at the performances of senior Olympians (50+) in the 2001 National
Senior Olympic Games. Both male and female performances declined by about 3 to
4% per year from age 50 to 85, but at a great rate after age 75.

Tanaka and Seals looked at US Masters Swimming Championship
results from 1991 to 1995. They found a steady decline in performance until
about age 70 when times started declining at an exponential rate. The declines
were greater in women than in men.

Many other researchers have found similar rates of decrease
in elite master-athlete performances at national championships in swimming
(Donato, Fairbrother) and triathlon (Lepers). In the triathlon paper Ironman
age group performances declined faster than for those doing Olympic-distance
races. I’ll get to the assumed reason why from the authors in an upcoming post
here.

So it appears we can expect to slow down significantly some
time in our 50s and experience the greatest negative rates of change in our 70s
and beyond. (Want to guess what my next birthday will be? Right. 70.) The key
questions are, why are these changes taking place and what can be done to slow
them? That’s what I’ll take a look at in my next three posts.