Scientists who study aging have been telling us for years that we can
expect a loss of muscle mass as we get older. We’re simply destined to lose muscle
fibers, especially type II fibers – the fast twitch ones (Deschenes, Iannuzzi-Sucich,
Karakelides, Proctor, Short,
Wilkes). We are told to expect about a 40% to 50% loss by age 80 (Doherty, Faulkner,
Karakelides, Lemmer). Depressing for someone of my advanced age (69).

Several more recent studies, however, are now concluding that the
changes with aging reported in such research are largely the result of disuse
and not as much due to the ravages of age as previously believed (AAgaard, Maharam,
Melov). How is it that science is finally coming to this conclusion? By
measuring what’s happening with older masters athletes who continue to compete
and comparing them with young athletes and with the oldsters’ sedentary age
peers.

For example, Wroblewski compared athletes aged 40 to 81 in a cross-sectional
study and found that although body fat increased with age, quadriceps muscle
mass and strength were similar across all ages. All of the subjects, regardless
of age, trained four or five times weekly as runners, swimmers, cyclists or
triathletes. Use it or lose it. Right?

Of course, the confounding element in cross-sectional studies such as this is that the
older athletes may have self-selected. In other words, perhaps they didn’t
maintain their muscle mass because they were athletes, but rather they were
athletes because they maintained their muscle mass. Those who couldn’t maintain
muscle mass with age may have quit their sport or never even started such
strenuous activities. So the research still leaves us wondering.

It could be inevitable that you will eventually lose some muscle, but it
may be insignificant for decades if the more recent research is to be accepted
at face value. The most common reason given for this happening is a decrease in
the body’s production of anabolic (muscle- and tissue-building) hormones such
as testosterone, estrogen, growth hormone, and insulin-like growth factor. But
then exercise is anabolic also – it may help us hold onto muscle as we get
older by slowing the demise of these hormones (Arazi, Kraemer, Cadore).

The accompanying pictures of the cross-sectional areas of three people of
different ages illustrate this belief (Wroblewski). These MRIs compare the
thigh muscles of two male triathletes at ages 40 and 70 with those of a
sedentary 74-year-old male. Note the atrophied muscles and surrounding fat on
the thighs of the sedentary man and how similar the muscle mass of the two
triathletes are regardless of age. Is this what we can expect? These pictures
made the rounds on the internet about a year ago and lend support to the idea
that remaining active through strenuous
exercise may well be the best thing you can do to hang on to your muscle mass
as you age. 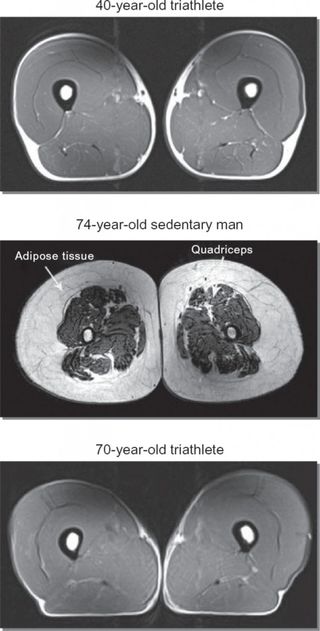 One of the authors of this study believes that aging accounts for only
about 30% of the decline in athletes (Wright), whereas most cross-sectional
studies of sedentary older people place 50% to 70% – or more – of the blame on
age alone. Could exercise keep your muscles young?

A couple of recent, unique studies from the University of Western
Ontario lend support to the “use it or lose it” concept (Power, Power). The
researchers counted the number of motor units in both young and old subjects. A
motor unit is a group of muscle fibers activated by a single nerve in the
spine. With aging (or is it disuse?) those nerves die and their associated
muscle fibers atrophy. And so we lose muscle size, strength and power. This has
been known for quite a long time with aging rats. But how about with people? The
initial Power’s study done in 2010 was the first to examine this phenomenon in
humans.

Basically, the researchers found that we’re quite similar to rats in
this respect. Runners in their 60s had about the same number of motor units in
their tibialis anterior (a shin muscle) as runners in their 20s. But when they
counted the motor units in sedentary but healthy people also in their 60s the
scientists discovered the inactive older folks had 35% fewer motor units than
the same-age runners. Essentially, the old runners had young leg muscles.

The Canadian researchers logically wondered if this finding meant that
all the muscle motor units in an aging runner’s body were maintained, or just
the running-related motor units? So in a similar follow-up study they counted motor
units in the biceps brachii (upper arm) of aging runners, young runners and
aging sedentary. They found that the older runners had about 48% fewer motor
units than the young runners and about the same as the older sedentary.
Apparently, exercise does not maintain muscles unless they are strenuously
trained. So there is now little doubt – use it or lose it. Right?

But, again, could this result could be the consequence of who the
subjects were? After all, it was a cross-sectional study. The subjects may have
self-selected. People who maintained their motor units may have continued to
compete into old age while those who didn’t maintain them dropped out of sport at a much younger age.
I wish we could take a look at some longitudinal studies of aging to see if these
results hold true when athletes are followed for several years. Unfortunately,
such research is lacking.

So it still comes down to opinion. Mine is that the existing research is
probably accurate and that while aging has some affect on muscles mass, the
greater cause of the decline is more than likely lack of use – an increasingly
sedentary lifestyle as we get older. I see this even in master athletes. The
older they become, the less strenuous their training.

In the next post I’ll take a look at sport science’s somewhat depressing view of aerobic
capacity (VO2max) and aging. Then we’ll move on to what I think the solutions
may be for maintaining (or even improving) muscle mass, VO2max and performance as we get older. I know
some won’t like my conclusions. Everyone is entitled to an opinion when we
have little in the way of data.