The two accompanying charts are the cadence distributions for a pro triathlete I once coached (click to enlarge). As labelled, one is from an Ironman and the other from an Olympic-distance race. Again, they are for the same athlete. There's an interesting difference between them which I see with every experienced triathlete I have ever coached—the cadence in the longer race was slower. 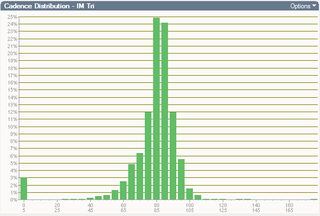 The Ironman bike split was 4:37 while the Olympic split was about 55 minutes. 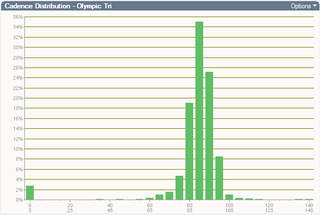 In the Olympic distribution chart nearly 60% of his pedaling was in the range of 85 to 95 rpm. That is slightly higher than for his Ironman race in which he pedaled for about half of the race at 80 to 90 rpm. There is also a definite skewing of the chart to the low rpm side (less than 80 rpm) in the Ironman while the Olympic has much more high cadence pedaling (greater than 95).

Again, this sort of shift in pedaling cadence is apparent whenever I look at samples for different distances from the same athlete. I don't know why this happens, but I suspect it has a lot to do with economy. The longer the steady-state race is, the more economical it must be to pedal at a slower cadence.

As a side thought here, notice that in both races he did not pedal for about 3% of the time. That was roughly 9 minutes for the Ironman and nearly 2 minutes for the Olympic. One reason for this is steep downhill portions of the course. When descending at high speed it is very costly in terms of glycogen, your most precious source of energy in a race, to try to go faster. At speeds above about 30 to 35 mph you are much better off getting into an aerodynamic tuck and coasting than pedaling with great effort. Trying to go faster will gain very little for you in terms of time, but cost you dearly in terms of energy thus threatening your capacity for maintaining speed later in the race. I wrote about this downhill-coasting concept in an earlier post which you can find here.