The Tour de France is just starting. I’m often asked how hard this race is. One way to answer that question is by examining the workload (intensity, duration, and frequency) of the riders. Heart rate isn’t very good for this, but power is excellent since it measures performance. So let me give you a little power background and then I’ll get back to how hard the race is.

If you have a power meter and use TrainingPeaks or WKO+ to analyze your training then you are probably familiar with the Performance Management Chart (PMC). This is a powerful tool that tracks what are essentially your fitness, fatigue, and form. The software calls these, respectively, Chronic Training Load (CTL), Acute Training Load (ATL), and Training Stress Balance (TSB). The power-based data that generates these metrics is called Training Stress Score (TSS). This is, essentially, a number that represents how hard the daily workout is based on intensity, duration, and Functional Threshold Power (FTP).

I know…that’s a lot of jargon. It’s really not as complicated as it sounds. You don’t have to do anything other than download your power meter and the software does the rest creating a chart that looks like the one you see here (the legend is in the lower left corner). This represents seven months of training for a rider. 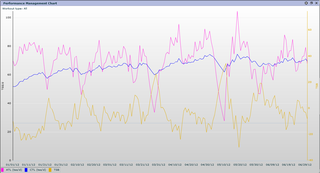 Most amateur riders have a CTL of around 60-110 at the start of their race seasons. And it will remain fairly stable throughout. Pro riders’ numbers are typically much higher with a CTL of about 150 (TSS/day) when they start the Tour. By the end of the Tour it will typically be in the neighborhood of 200. That’s a 33% increase in three weeks. Huge!

To cause that to happen, daily TSS must be gigantic. I consider a daily TSS of 150 to be the threshold for a hard workout. A hard, two-hour road race will produce a TSS of about 160 to 180. Assuming a recovery day or two after such a race and then getting back to normal training, a rider will see only a small change in CTL over the course of the week after the race. It may rise from 90 to 95.

The daily TSS for a rider during the Tour is about double what most of us do in a road race. The accompanying daily TSS chart illustrates this. It’s from the 2009 Tour of Saxo Bank’s Chris Anker Sorensen. Each bar represents the TSS for one day of the three weeks. The TSS scale is on the right, y-axis. The two shortest bars are recovery days when he did active recovery rides of about 40 TSS. The blue and red data points for each day represent his hardest 5-minute power outputs (blue) and 20-minute power outputs (red).  The wattage scale is on the left, y-axis. The cumulative TSS for an amateur in a very high workload week is generally around 700. Sorensen is averaging roughly twice that in this chart—around 1500 TSS per week. In the first week he hit a cumulative high of about 1725 TSS.

Fatigue (ATL) becomes overwhelming as the Tour progresses. A rider’s form (TSB) will remain negative after the first few days and rise steadily throughout. Only the two rest days will allow it to come down a bit, and then it will still be negative. By the last week just throwing a leg over the bike at the start of the day is a tremendous burden. Following the Tour it will take at least two weeks to shed the fatigue. Some riders will still be tired by the time the Vuelta de Espana starts in the fall. Doubling up with the Tour and the Giro d’Italia or the Tour and the Vuelta makes for a very challenging season. Overtraining is imminent. Racing and finishing all three is practically unheard of.

From a strictly numbers’ perspective, I hope that gives you a sense of just how hard the Tour is. From a real-world experience, in past years I’ve chased the Tour and ridden the mountain stages in either the Alps or Pyrenees. Just riding the courses for a week or so—without racing them—created tremendous fatigue. I’m amazed at what they do.

As always, I consider this next three weeks one of the highlights of my year. I’ll enjoy watching from the comfort of my couch, but understand what they are experiencing. Time to turn on the TV!