I’ve beat around the intervals bush long enough. Let’s get to what I’m sure you’re most interested in: types of intervals and how to best incorporate them into your training. This is a rather massive topic given that there are so many ways of doing them based on periodization, the purpose of the workout, the athlete’s fitness and level of experience, and the sport. So what I’m going to explain here is fairly basic and I won’t go into all of the subtle nuances.

But first I want to make sure we are using the same terminology. That will make explanations a bit easier. Let’s start with the word “intervals.” What this actually refers to is the time between the hard efforts—the recovery breaks or pauses between the hard efforts. In most sports athletes have come to refer to the hard effort as the “interval” but that’s actually a misuse of the word. It’s so common to use the word that way, however, that it’s now accepted by most except some of the really hardcore, sport-science types. So to hold down the confusion I will call the hard efforts “work intervals” (WI) and the low efforts between them as “recovery intervals” (RI). I’ll also refer to the total accumulated time or distance or kilojoules of the work intervals within a single session as the “work interval volume” (WIV).

If you need further explanations of the intensity of the WI and RI as used in the following discussion please go here.

I should also point out here that the speed, velocity, pace, heart rate, power, or effort of the RI is also important. It doesn’t have to be extremely easy or slow as you’ll see below. (By the way, it’s not a good idea to make the RI completely passive as active recovery has been shown to better sustain WI power output [Connolly].) The primary purpose of doing intervals is to prepare for the stresses of the race. And since in a race you don’t get recovery intervals, the interval session some how needs to gradually, over several sessions, take on the characteristics of the race. For this reason I like to keep the intensity of the WI racelike while gradually increasing the intensity of the RI. Or the other option is to keep the intensity of the WI the same while making it shorter.

These then are the most critical components of an interval session save one—the speed, velocity, pace, heart rate, power, or effort of the WI. Every interval workout needs to precisely define these variables relative to the purpose of the session.

In Part 2 of this series I reminisced about how my college track coach had us doing intervals every day without defining the components with the single exception of distance. Each WI was 400 meters. Pace, RI, and WIV were undefined. That made for a frustrating session from the athlete’s point of view. There were lots of unanswered questions, the most basic of which was, what is the purpose of this workout? I’m sure the coach would have answered this simplistically as, “to make you faster.” Unfortunately, it doesn’t work that way. If most of the components of an interval workout are undefined then the likelihood of achieving something of value is greatly reduced. If the parts of the interval session are random then it is unlikely that the intended benefits will be realized.

But I’m starting to digress. Let’s get back to the subtle nuances of intervals by sport. A given interval workout isn’t going to be the same for all sports. For example, there’s a tremendous difference in the same type of interval workout between swimming, cycling, and running. Recovery is rather fast in the water but is much slower when running. Bike recovery between intervals is some place between that of swimming and running. Similarly, the WIV for a given workout can be longer in the pool than when running. The risk of injury is far greater when running so one must be more conservative with a run interval session’s volume. Again, cycling falls between these two extremes. And there are other subtle nuances by sport such as the relative need to maintain technique when fatigued. 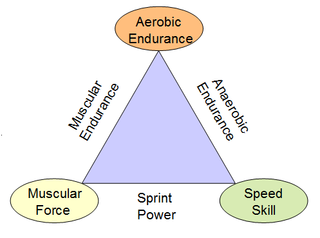 One more explanation before I get into examples of interval workouts (with my apologies for the delay). As described in my Training Bible books, I organize training periodization and all workouts according to 6 “abilities.” These are aerobic endurance, muscular force, speed skills, muscular endurance, anaerobic endurance, and sprint power. The accompanying triangular graphic is how I illustrated this in my books. (Thanks to Dr. Tudor Bompa for introducing this concept to me many, many years ago.) The 6 abilities are divided into 2 categories—basic and advanced. The corners of the triangle are the basic abilities: aerobic endurance, muscular force, and speed skill. For most athletes in most sports the basic abilities are the ones that the Base period (or Accumulation block) focuses on. Note that this is not always the case, which you will see later. In the Build period (or Transmutation block) the focus of training is usually the advanced abilities: muscular endurance, anaerobic endurance, and sprint power. Again, that’s not always the case.

Okay, I think I’ve given you enough background to understand what I’m going to explain below. So let’s get on with the details of intervals using examples based on the 6 abilities. In this part I’ll cover the basic abilities and in Part 5 the advanced abilities. Bear in mind that what I’ll describe here is my way of training athletes using intervals. It’s not the only way or even necessarily the best way for you. But if you follow my training system as described in the Training Bible books then I’d strongly suggest you do intervals as described here as that ensures all of the pieces will fit together nicely. Training is much like putting a jigsaw puzzle together. Taking pieces from various other puzzles and trying to put them together simply makes for a mess. Whatever training system you use, I’d suggest following it rather closely.

Periodization: I almost always have athletes do this workout in the late Base period and I usually include 1-3 such intervals as the latter part of another workout in the Build period.

Measuring progress: When the average WI output-input ratio (power or speed divided by heart rate) stabilizes for several consecutive sessions and WI decoupling is low then I know AE is well-established. “Decoupling” essentially means that power or pace and heart rate remain steady relative to one another. (To learn more about decoupling do a search on the home page of my blog.) The athlete isn’t ready to progress to advanced ability workouts until AE is excellent.

Muscular force interval workouts increase the athlete’s ability to overcome resistance usually in the form of water, wind, and hills. These are typically short repetitions done using some sort of resistance such as a high gear (bike), steep hill, strong head wind, rubber tubing (swim), or drag devices (swim, run). Here is a workout I commonly have athletes do.

WIV: There is great variance in how much of this an athlete can manage. It should certainly end whenever power or speed drops by more than 5%. This is also a high-risk workout that can easily result in injury so it’s best to be conservative with WIV, especially early in the season.

Periodization: Commonly done in the Base period and seldom if at all in Build.

Measuring progress: The athlete should be noticeably able to generate more power or speed in the same conditions.

Speed skills sessions are intended to improve efficiency by improving movement skills. This usually involves doing drills to refine or learn a technique. Drills are common in swimming. A typical cycling drill is to increase the pedaling cadence in a low gear to a max level for a few seconds every few minutes while relaxing the body. Runners do “strides” workouts in which they run fast, usually down a slight hill, while focusing on one aspect of technique such as foot position at strike. There many, many drills for each sport.

WIV: 2-6 minutes (the drill must stop if technique is the least bit compromised).

Periodization: This may be done throughout the season but is most effective and most used early in the Base period.

Measuring progress: The drills should become easier or an expert with a trained eye for technique in the sport subjectively determines that there is progress. This may involve the use of video to compare before and after technique.