I’ve always enjoyed history. In my undergrad days I had a double major – physical education and history. I even taught US history at the high school level for nine years in what now seems like another life. That was back in the late 1960s and most of the 1970s (there was a gap in the middle as Uncle Sam needed me to help fight a war in Vietnam). Whenever I put the two together (physical fitness and history – not teaching and war) I’m having a good time. Studying how the icons of endurance sports used to train is especially interesting to me. I hope to write about some of them here in the next few weeks – if I can get ahead of the book deadline I’m currently staring down the barrel of. It’s been a challenging book to write. I’ll tell you about that some other time. But for now I want to tell you about how Mark Allen trained 20 years ago and what we can still learn from it.

We think of Allen as perhaps being the best Ironman-distance triathlete in the sport’s rather short history. I could even make the case that he was the greatest male triathlete of all time at all distances given his 20 wins in a row in the late 1980s and early 1990s including the first World Championship at the Olympic distance in 1989. But until 1989 he could not make it happen in the biggest triathlon of all – Ironman Hawaii. Six times he DNF’ed or finished behind people such as Dave Scott, Scott Molina and Scott Tinley. Then it happened. His training paid off and he won six times in six starts in Kona. How did he train then?

He basically followed a three-mesocycle periodization format. In the first period he focused on aerobic endurance. The second was devoted to strength. And the third was for speed. Then he was ready to race. He generally moved on to the next mesocycle when he saw an obvious plateau in performance.

We can still learn a lot from how he trained. The first block of his training is the piece I so often see missing in most athletes’ training. Regardless of your endurance sport, the most important aspect of your fitness is aerobic endurance. Yet I see triathletes, cyclists and runners only paying lip service to it. They seem to be impatient to get to the hard stuff – hill work, intervals, fartlek and tempo.

I know of athletes at all levels, from age groupers to top pros, in many endurance sports having great seasons after spending several weeks just focused on aerobic endurance. It’s the most important training you can do in every macrocycle.

Allen used a fairly complex formula to determine an aerobic endurance training heart rate zone based mostly on age and experience. I’ve found it’s remarkably accurate and closely matches the zone 2 training I have athletes do in their Base periods. His long, steady sessions at this rather low effort built a great aerobic engine. His goal was to get as fast as possible at a low effort. That’s a great goal. Using the formula he determined his aerobic endurance training heart rate was about 155 bpm and so would spend hours running and riding at that intensity in the first period. He says that when he first started he was running 8:15 mile pace (5:09/km) at 155 bpm. After a few weeks he was running 5:20 per mile (3:20/km) at the same heart rate. That’s a whopping 35% improvement. How would you like to run 35% faster or raise your FTP on the bike by 35%? 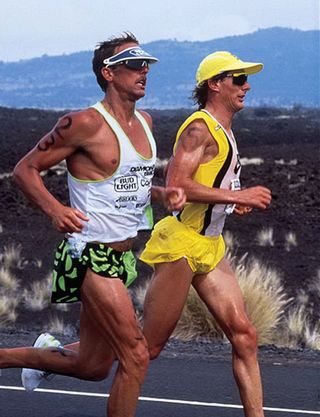 If he could run a 5:20 mile at a low heart rate and effort, coming off of the bike after 112 miles and running 6 minutes per mile was relatively easy. In fact, that’s what he did in 1989 in perhaps the greatest Ironman of all time. He went shoulder to shoulder with Dave Scott until about 4km to go on the run when Dave faded and Mark kept his relentless 6-minute pace going (see accompanying picture). I was there as a spectator that day and am still amazed at how easy he made it look. Two hours, forty minutes and four seconds for a marathon after riding 112 miles. No one has matched that time in 19 years.

It seems that we’ve forgotten how important it is to become as fast as possible at a low effort before moving on to higher-intensity training. I’d suggest that after your first A-priority race this season that you return to Base training for a few weeks and do lots of training in my heart rate 2 zone for the run or the bike, or Andy Coggan’s power 2 zone on the bike. You’ll get faster without working any harder.