There was a time when athletes believed that in the Base period one should only do long, slow distance. And in the Build period we were to primarily do high-intensity interval training. Those who believe this are now in the minority, I suspect. That’s only my opinion since there’s no way of knowing how many serious athletes still train with these “rules” in mind. I’m sure there are some, but I hear from them less every year, especially in the winter months, it seems.

The trend now, and perhaps the current majority point of view, is that there should be a wide variety of intensities throughout the training year with the mix varying by period. The intensities I’m talking about here run the gamut from very slow and easy, all aerobic workouts to extreme top end, anaerobic capacity repeats—and everything in between. That means training volume at any given time in the season includes several intensities. All that changes is how much of each intensity is included in a given period.

So what does that mean when it comes time to plan a season? Well, we might think of this in terms of the seven zones in my heart rate and pace-based training method (as found here and in The Triathlete’s Training Bible) or Dr. Andy Coggan’s with his seven power zones (also at the above link and in Training and Racing with a Power Meter). While a heart rate zone does not translate directly into a pace or power zone (see here for an explanation of why not), a hypothetical endurance athlete who is preparing a two-hour race might train with intensity distributions throughout the season something like what is suggested in this table (click to enlarge)… 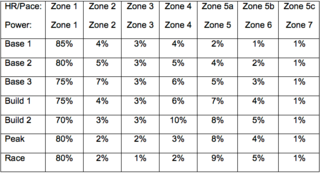 Now please keep in mind that this table is not supposed to represent how you—or anyone else, for that matter—should train in the build up to a race. It’s just a hypothetical example. The intensity is a little too perfectly distributed to be how anyone would train in the real world. It might vary considerably from what you see here due one's individual limiters, the weather, and individual lifestyles, not to mention the type of event for which one is training (Olympic-distance triathlon, bicycle road race, half marathon, etc). The purpose here is simply to show that there is at least some time spent in each zone throughout the season. It isn’t all or nothing determined by the Base and Build periods.

Some old-time coaches and athletes might complain that the inclusion of anaerobic training (zones 5a, 5b, 5c and 5, 6, 7) “nullifies” the benefits of aerobic training in the Base period. I’ve looked for research showing this to be the case for more than 20 years and have never found one such study. I seriously doubt there is one (if you know of such research please let me know). I’ve also never seen an athlete I’ve trained experience a noticeable loss of aerobic fitness from having done “too much” training above the anaerobic threshold.

The bottom line here is that there are no known downsides to doing at least a small amount of training in each zone throughout the preparation for a race. And, in fact, such a variety may even produce better race fitness over the course of a season as there is no need to “start from scratch” in building a specific type of fitness in the initial stages of a new training period.