I apologize for the long gaps between posts to my blog. Even though I am now retired from one-on-one coaching it seems there’s still never any time for writing here. But one thing I seldom pass up in the daily bustle is sleep. In Part 1 on this topic I railed against athletes having so many responsibilities in their lives that they have to cut out something, and that, unfortunately, is usually sleep.

As I tried to explain in Part 1, giving up time in bed means a reduction in your adaptive response to training. That means you don’t reap the full fitness benefits of the day’s workout. It’s during sleep that the good stuff you want happens. Your fitness increases as naturally occurring anabolic (“tissue-building”) hormones are released. This is why I often say that hard workouts don’t make you more fit—they only produce the potential for increased fitness. It’s during recovery, especially sleep, that this occurs.

Hormones are released in waves in certain sleep cycles during the night. There are several repeating cycles as you doze. The two that seem to be most productive, as far as increased fitness due to hormone release, are the rapid-eye movement (REM) and deep sleep cycles. These are when scientists who study sleep agree that tissue-building hormone production is greatest resulting in adaptation to the physical stresses you experienced that day. REM sleep seems to be especially critical. It happens about every 90 minutes to two hours and lasts only a few minutes at a time making up perhaps 20 to 25 percent of your sleep time—if you have a full night of sleep. And, curiously, REM sleep appears to occur mostly late in sleep—in the final hours before you wake up. So artificially shortening your sleep with an alarm early in the morning may well be costing you fitness. A portion of the previous day’s workout was for naught.

All of this is why, when I was coaching, I urged my clients to get as much sleep as they could. Adequate sleep means greater fitness and that means improved race performance and, therefore, goal achievement.

And I should make one other important point here. A common thought among athletes is that they can cut their short sleep Monday through Friday and then “catch-up” on the weekends. It doesn’t work that way. You can’t hold hormones in reserve for a few days and then release them in larger quantities later on. The daily opportunities were simply lost. It’s good to sleep on the weekends, but that doesn’t mean everything having to do with adaptation is therefore going to balance out for the week. It was just lost opportunities.

So how do you know if you’re getting enough siesta time? If you are waking up naturally—no alarm clock—then you are probably doing pretty well in regards to the benefits of sleep. That probably means around seven hours in the sack. But if you’re like most of the athletes I coached over the years, you’d like to see the data that supports this assumption. The best I have found is a device called Emfit QS. It measures and reports your nightly sleep-cycle durations and much more, such as total sleep time, heart rate patterns throughout the night, heart rate variability, breathing patterns, sleepless movement, and more. All of this appears on your smart phone once you are out of bed for the day. 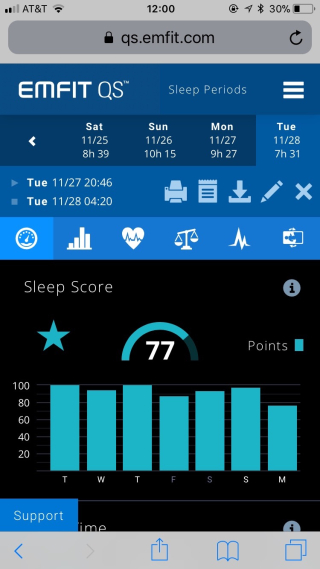 The most basic sleep data is also automatically uploaded to your TrainingPeaks.com account every morning as shown here. 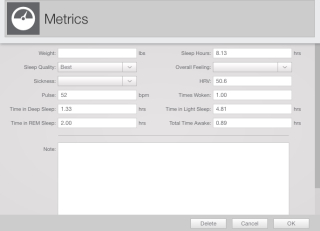 It’s simple to use, which I really like. No chest strap or other devices to wear. No manually turning it off and on. You just go to bed and it starts working. The device looks like a short belt that is placed between your mattress and box springs beneath where you sleep and perpendicular to your body position when in bed. It’s then connected to your local Wi-Fi network. Once set up you never have to touch it again. It’s pretty amazing that it can check all of these parameters given my 14-inch mattress and yet never appears to include my wife’s data from the other side of the bed. Is the data accurate? I can’t say as I have nothing to compare it with. But if it is simply dependable that is ok by me.

The downside, as with many of these amazing high-tech devices on the market these days, is cost. The cheapest I’ve found is $235 on Amazon.

The bottom line, whether you actually measure your 40 winks or not, is that to fully reap the benefits of your training, lengthy and regular sleep is necessary. Artificially shortening your nightly sleep means less fitness and reduced performance.