In block periodization, according to Vladimir Issurin in his book, Block Periodization,  there are three mesocycles which are actually quite similar to what is used in linear periodization. They are accumulation (“base” in linear-speak), transmutation (“build”) and realization (“peak” and “race”). Let’s take a look at each block within these mesocycles and how training may be designed using an example from what I’ve been doing with my athletes. This example is not necessarily what’s best for you or for any given sport. I’ve used this primarily with road cyclists but it could be adapted to work for triathletes, runners, mountain bikers and other endurance athletes.

Accumulation Purpose: Develop as much “general” fitness as possible.

Block 1: Efficiency. This block lasts 3 to 6 weeks depending on what the athlete has been doing prior to starting back into structured training. If block 1 follows several weeks of inactivity then the longer time frame is probably better. But if the athlete has remained active in the sport then this may be far fewer weeks. During this block I’ve had the athlete focus on efficiency of movement. This has included drills for speed skills and muscular force sessions (weights and/or sport-specific force training).

Block 2: Aerobic Endurance 1. Here I’ve used 3 to 6 weeks, also, but it should seldom last 6 weeks. In fact, that would be unusual for the advanced athlete. It could last even less than 3 weeks as advanced athletes seem to get limited value from zone 2 training if their starting fitness is even moderately well-developed. During this time the athlete trains almost daily with steady workouts at the aerobic threshold (AeT) heart rate. While testing is necessary to determine AeT with certainty, it is usually in the low 2 zone (using my heart rate system) and often about 25-30bpm below the lactate/anaerobic threshold heart rate. For this type of training I have the athlete gauge intensity by using heart rate only. The “Block 2” graphic here shows how heart rate distribution may look for such a workout. 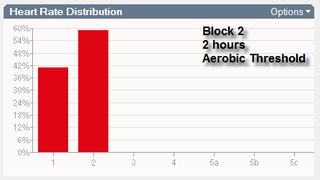 Block 2 lasts until I see the output-input ratio stabilize, especially at previously attained high levels, indicating that no further aerobic gains are being made. For some advanced athletes this may be almost immediately on starting this block. Every 3 weeks or at the end of this block the athlete rests for 2 days and then we do some testing to establish a baseline of fitness. This like to test for metabolic efficiency and in a lab along with a field test, generally a CP30  or functional threshold power/pace (FTP) test. The met test is not always available for my athletes, however.

Block 3: Aerobic Endurance 2. For 3 to 6 weeks the athlete alternates zone 3 and zone 2 workouts. For zone 3 I use output measurement (power, pace, speed) rather than heart rate to set the intensity. Heart rate continues to be used for zone 2 AeT sessions. Again, the zone 3 workouts are done steady state and typically involve long intervals. A common session is 3 to 6 intervals of 12 to 20 minutes duration each (longer for cycling and shorter for running) done in zone 3 with 5-minute recoveries. Other than warm-up and cool down, when not in zone 3 the athlete should be in zone 2 for maintenance. This includes recovery intervals. Some athletes may prefer to do long, steady rides or runs of 1-2 hours, non-stop, in zone 3. That’s okay so long as they are recovering well enough to repeat it the next day.

In the “Block 3” chart here you can see an example of the power distribution for such a workout. These interval sessions may be done on a flat course or on a long, slight hill (less than 5% grade). Output-input is measured for each of these sessions and, again, I look for the eventual stabilization of this ratio indicating that fitness gains have stopped. 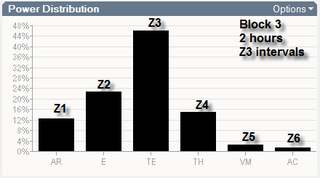 Some athletes will be able to manage 2 or even 3 such workouts on consecutive days followed by one day of zone 2 AeT training as in block 2. However, older athletes may need more frequent zone 2 sessions and perhaps even an occasional zone 1 session to allow for recovery. As before, at the end of each 3 weeks the athlete rests for 2-3 days and then progress is assessed using the same tests as before. Immediately after the testing training resumes.

Although we are usually told to avoid zone 3 training, this is the block in which I have seen the greatest gains in FTP. Zone 3, especially the upper portion, seems to be quite effective for producing aerobic fitness and yet not overly demanding on the body requiring frequent or extended recovery. It seems I saw such a finding in a paper by Dr. Eric Bannister a few years ago but I’ve been unable to find it. He’s the one who developed the TRIMP system. Allen and Coggan in their excellent book, Training and Racing with a Power Meter, refer to the upper end of zone 3 and the lower end of zone 4 as the “sweet spot” and a range that is very effective for producing aerobic fitness.

Block 4: Muscular Endurance. For some events this block may mark the beginning of the “transmutation” mesocycle. This would be true for events that are strictly determined by the muscular endurance of the advanced athlete. Probably the best examples of this are marathon, Ironman and half-Ironman triathlon training. For such events the long-distance athlete may even change block 4 to anaerobic endurance training with short (2-4 minute intervals) done at VO2max power, pace or speed and separated by recoveries of equal duration. About 15 to 20 minutes of total work interval time in a single session has been shown to be quite effective at boosting aerobic capacity before starting race-specific training.

For shorter events and those that are variably paced such as bicycle road races, this block is the last of the “accumulation” period. For such events the athlete trains for 3 to 6 weeks using long intervals done at zone 4 output (power, pace or speed) with short recoveries. These may be something such as 5 to 8 intervals of 6- to 12-minutes duration with recovery intervals that are one-fourth as long (example: 5 x 6 minutes with 90-second recoveries). These intervals may also be done as repeats on a hill. Shorter intervals are used for running and longer for cycling.

Zone 2 should be incorporated into these muscular endurance workouts whenever possible for aerobic endurance maintenance. I will also often have the athlete do a 20- to 30-minute steady state effort following the zone 4 intervals. Aerobic fitness is high when the output-input ratio for this zone 3 effort is similar to what the athlete produced when fresher back in block 3. It may be a bit low early in block 4 but should rise as fitness improves.

Three or four of these zone 4 interval workouts in a week are usually manageable by the advanced athlete with zone 2 AeT sessions or zone 1 recovery the following day depending on the athlete.

Accompanying is a chart of a block 4 workout showing a typical power distribution. These zone 4 intervals may be done every other day with a zone 2 (heart rate) or a zone 1 recovery day, depending on the athlete’s needs, alternating with the interval sessions. 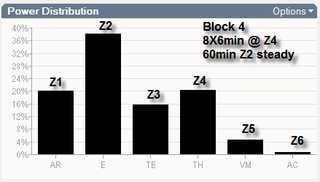 Racing at the B- and C-priority level may now begin. Before B races the athlete actively recovers for 2 or 3 days. Markers of progress include race performance and testing as before after 3 weeks of training.

Transmutation Purpose: Develop as much “race-specific” readiness as possible.

Block 5: Event Specificity. This block is likely to last 4 to 8 weeks depending on how quickly the athlete responds. The measures of improvement now are much more event-related. The workouts should closely simulate the anticipated stresses of the targeted race or races. The stress should now be based primarily on maintaining a racelike intensity for durations that approximate what will be experienced in the race. Weekly volume is unimportant and has little to do with race preparation. “Accumulation” is no longer the focus. Instead, the focus should be strictly on doing racelike workouts on racelike terrain with recovery days as needed. Every fourth week the athlete should reduce the training stress by including frequent zone 2 AeT sessions which will maintain aerobic endurance. Progress is determined through B- and C-priority race performances and event-specific workout results.

Block 6: Taper and Peak. For one to two weeks the advanced athlete does a very challenging, racelike workout every third day with two days of recovery and zone 2 AeT maintenance sessions between them. The duration of the racelike workouts is shortened with each subsequent session. Being well-rested for each of these workouts is critical.

Block 7: Competition. This is the block when racing occurs. It could be a single race, a stage race or even a few weekly and closely spaced races. Some athletes may be able to maintain their peak of fitness for several weeks while others will find this difficult to do. In the days between races the first priority is to recover from the previous race and then maintain or develop the ability critical to success in the next race. For the advanced athlete this is likely to be muscular endurance, anaerobic endurance and/or sprint power.

Transition Purpose: Rejuvenate the body and the mind.

Block 8: Rejuvenation. Following the last of the races in the competition block it’s time for recovery. How long this recovery lasts depends on how stressful the preceding race and preparation for it was, the presence of injuries or soreness, the athlete’s level of motivation to return to focused training and when this block falls in the season (block 8 is longer at the end of the season than early in the season). There are no scheduled workouts. The athlete should train randomly, if at all. The focus is on rejuvenation, not maintenance of fitness.

Note that these blocks can be used as training modules and don’t necessarily have to occur in a continuous manner over big chunks of the season. For example, I’ve had athletes go back to a previous block to re-establish the depth of fitness for that ability. Following that we continue back into the progression outlined above. When repeating an earlier block its duration may be quite brief.

Again, what I’ve described above is only an example, and one based on my limited experience with block periodization. It may not be the best for you and I expect I will tweak it as I learn more. As I do I’ll post updates here.

I can’t emphasize enough that block periodization is intended only for the advanced athlete as described here. It is not for the novice or the moderately trained athlete. I would not expect good results for these two groups of athletes should they use a block training plan. In fact, they may even lose fitness. But if you are an advanced athlete you may find that such a system greatly enhances your performance. As always, I would appreciate your posted comments on what you’ve learned with such training.